“In mid-1992, CNN reported that sixteen year-old Amy Fisher had just shot Mary Jo Buttafuoco, something about wanting the older woman dead so Joey – the bloody cradle snatcher – Buttafuoco could be free, I remember Amy was my age. Germany was unified, and British MPs had just elected a woman as speaker. The Soviet Union had been over for about two years, and the Russian-speaking part of Ukraine was threatening secession. The police officers who kicked Rodney King’s head in were getting acquitted for the first time. Grunge rockers were breaking their necks to that song, “smells like Teen Spirit” – inspired by the smell of latrines, I think – and African reggae singers were in a panic, rewriting songs, rearranging LPs and pushing back release dates now that Mandela was really free. Fuel prices here increased for the first time past the one naira mark. We had civilian governors and a military president. I was awaiting my matriculation exam results, hoping to make it into the University of Benin to study medicine. I was learning to drive on the busy Warri Streets. I was being a good son.”

Digital technology is poised to save Africa’s stories from the comatose printing presses of Africa’s “publishers.” Good writers still languish in Africa, staring at lovely stories trapped in the mediocrity of imitation books but all that is changing. E-books are here for African writers who are savvy enough to port their books to the Kindle or the Nook and share with the world.  It is a good thing. I have been buying and downloading books by writers living the living in Nigeria, warts and all. I am happy because now I can read many more of our stories than ever before. The Internet has been a boon to our literature. Why do I like reading books by writers “on the ground” in Nigeria as they say? I pine for the stories of our people unvarnished. 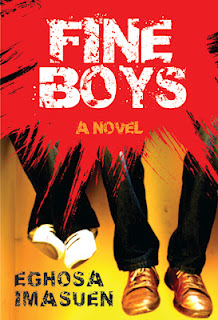 One of those books is Fine Boys by Eghosa Imasuen. I heartily recommend this book. There are many reasons why you should read this coming of age story. It is an important book on many levels. I do not know of any Nigerian novel that has taken the time to record history in the 90’s through university campus life as this novel has done. In this book, we follow the protagonist Ewaen and his siblings as they endure life under constantly feuding middle class parents, grow up amidst the drama that is Nigeria. We accompany Ewaen to the University of Benin and through his eyes we witness several issues that occurred in Nigeria in the 90s. There are so many issues: Campus cults took youth peer pressure to violent and deadly lows, there were brutal military regimes, a thwarted attempt at democracy (June 12th 1993), deteriorating educational and social infrastructure, etc. All through the dysfunction, the reader is taken through a tour of numerous relationships, some touching, some banal, and many quite dysfunctional. Marital abuse in the protagonist’s home is a sobering reminder of the war that young children endure in many homes. I admire how Ewaen, the protagonist’s spirit remained unbroken; he continued to weave joy and adventure out of situations that should have broken him irreparably. The book is a fine reminder that every day children trudge bravely through wars that they did not ask for, many of them in their homes.

Imasuen does a great job of painting the colorful atmosphere of campus life at the University of Benin, my alma mater.  Interestingly enough, In my time, in the late 70’s the decay had already begun, university staff quarters (the Junior Staff Quarters aka JSQ) were turning into sprawling slums selling food, booze, cigarettes and sex. The reader will find Imasuen’s palette a colorful world in which light-skinned women are described as “yellow” and only the initiated would understand what would be a slur in the West because Imasuen dispenses with the convenience of a glossary. Let the reader do the research. I like that even though as a result the book comes across as parochial. But then, we would never say that of a book written by a Westerner, would we? It is time for us to stand up for our self-loathing selves.

Imasuen has come a long way since his debut novel To St. Patrick. Fine Boys is chockfull of remarkable prose like this:

“The light that seeped in through the sheer curtains bathed everything in a blue translucence that made the room look like one of those Igbo market shops where the most awful pair of jeans miraculously became a pair of Versace specials.”

And this one is one of my favorites:

“Mesiri’s room was too tidy to keep anything in – your stuff could get contaminated by the hygiene.”

It is not a perfect book; it does get occasionally sloppy and tedious and I don’t like that the e-book’s pages are not numbered. It is as if Imasuen thought about a lot about the issues of that decade and threw them all slaphappy into the book, Imasuen struggles mightily between personal narrative and fiction. This is a fat novel that should have been pruned a bit. No detail escapes Imasuen, no matter how banal. It is a problem. Imasuen devotes the bulk of the novel to obsessing about campus cults; the Black Axe, Costra Nostra, Maphite, Neo-Black Movement. However, he did not penetrate the inner circle of the cults, the analysis was superficial. The reader wonders: How were these cults different from each other? Why did they mushroom in the 80’s and ‘90’s? What made them attractive to the teeming teens that joined them in droves? Why did hundreds of teens endure violent and reprehensible rites of passage in these cults? Was part of the reason because military regimes had become more draconian, brutal and corrupt and children grew up in these circumstances becoming cold, calculating and Machiavellian like their adults?

The book touches on the turbulent ‘90’s in Nigeria, brutal democracy and the work of the prodemocracy movement, with Western culture and democracy as asymptotes. There are identity issues, Wilhelm the half-caste or biracial is called oyinbo or white man. Lighter colored people are up on the totem pole of the caste system. People go to “summer vacation” abroad.  Gang members or “confra boys” man violent gangs, in the hostels smelly toilets are filled to the brim, classes are held in stadium sized lecture halls, with lecturers hollering without microphones, the cost of living is abominably high (it seems students are forever buying food, booze, cigarettes and lecture notes or “handouts” at extortionist prices).

The analysis focuses on the dysfunction of organized gangs or cults but invariably ignores the fact that teens tend to move in gangs, benign or otherwise. It is hard for the reader to ignore the protagonist’s own gang with its own rules, youths with names like Odegua, Mesiri, Wilhelm, Tuoyo, Oliver Tambo, Fram Oluchi, Preppa, K.O.,and  the girls, Tseye, Amide and Weyinmi (Minor correction: Odegua is never a male name). It makes for an interesting albeit rambling stew of a story. Much of it could be seen as banal prattle. As an aside, properly edited and adapted it would make for a good Nollywood movie about life on campus in the ‘90s.  In Fine Boys, we witness consumerism at its worst. There is no purpose to these lives. This is the beginning of the end, the middle class fleeing a looming war zone, a great story sloppily told. But then if you love ogbono soup, you will not mind this story dribbling down your memory’s chin. One perhaps unintended outcome is that Imasuen paints the university students of the 90’s as not meeting their potential, as perhaps not too bright. Indeed much of their dialogue is banal self-absorbed prattle. Regardless, it is a very colorful life told in colorful language and with great drama. There is even a “thief catching ceremony” organized by “native doctors.”

The book is mostly well edited, an incredible feat in a society that is indifferent to quality control. Imasuen shows off some good prose; enthusiastic passionate honest writing when he is good he deftly employs luscious turns of phrases. He is definitely original. I do not know of many African writers who would have enough self-confidence to design a character like Ewaen’s girlfriend Amide who says she is waiting “for the rice to done…”

This is not a tidy book. Some would say convincingly that this book is not serious literature; it comes across as too autobiographical and parochial, with little attempt to make it less so. It was like Imasuen kept a detailed rambling diary of his activities growing up. The story meanders and some of the characters are not well developed, it is hard to tell them apart. The protagonist is too busy talking. It would have been more helpful perhaps to devote chapters to a few main characters narrating their tales in the first person.

I must applaud Imasuen for documenting an important era in a way no one has done in recent times. In the “Chair dance” I basked in the lush delicacy of a halcyon past, of teenage angst, fighting alienation. In Fine Boys, one comes across familiar themes present in African literature, but new and contemporary themes emerged also: Attempted suicide, alcohol and drug abuse, the new Christianity and he prodemocracy movement that swept much of Black Africa in the 90s. The novel was also in a way a detailed commentary on identity issues, One of the characters, Wilhelm the half-caste (biracial) is called oyinbo. Lighter colored people are up on the totem pole of the caste system. Summer vacation in London marks you out as part of the elite. Then there were the “Confra boys” seeking to belong by manning violent gangs.  Youths in search of the golden fleece endure campuses with smelly toilets filled to the brim, classes in stadium sized lecture halls, lecturers hollering without microphones and an abominable cost of living (it seems students are forever buying food, booze, cigarettes and handouts at extortionist prices). This is consumerism at its worst. For these youths, there were so many rites of passage, there seemed to be no purpose to their lives. From the vantage point of today’s Nigeria, Fine Boys seems to chronicle the beginning of the end, the middle class fleeing a looming war zone, a great story sloppily told. But then if you love ogbono soup, you will not mind this story dribbling down your memory’s chin. As an aside, it would be an interesting scholarly activity to compare Imasuen’s approach to semi-autobiographical fiction in Fine Boys, to the Kenyan writer Binyavanga Wainaina in his rollicking memoir One Day I Will Write About This Place.

In the end, Imasuen’s vision is apocalyptic as the characters muse thus:

”And making change is getting even more difficult for the sellers,” I added. “Remember in year one when a Five Naira note could get you a cigarette and a Fanta?”

Preppa nooded, “Maybe by the time that medical student comes back to Uniben, a bottle of beer will be one hundred Naira.:

Those were halcyon days.

9 thoughts on “Eghosa Imasuen: On Fine Boys and Yellow Girls”