Daughters of Eve and Other New Short Stories from Nigeria is an anthology of Nigerian short stories edited by Dr. Emma Dawson and published by Critical, Cultural and Communications Press (CCCP), Nottingham. It features the writers Abubakar Adam Ibrahim, Ikeogu Oke, Peter Ike Amadi, Jumoke Verissimo, Ifeanyi Ogboh, Rotimi (Timi) Ogunjobi, Uchechukwu Peter Umezurike, Tolu Ogunlesi, Soji Cole, Alpha Emeka, and Emmanuel Iduma. This is an anthology so bad, I almost resolved to give in to the fervent wishes of my friends and foes alike – to give up reading and reviewing books. It is becoming an unbearable ordeal. Why did I read this book? Well, the editor’s preface starts out with an ambitious proclamation: “This series focuses on the production of new writing in English, specifically new World Englishes fiction… writing which is newly sourced, edited and presented with a critical introduction.” This appears to be the second volume in a planned series of anthologies of short stories from certain sections of the world, where English is arguably a second language. 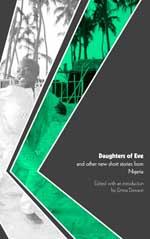 It is disappointing that there is only one female writer showcased in this volume. This is hardly representative of the muscular performances of Nigeria’s female writers. Several of these alleged writers do not belong in any anthology that seeks relevance. This is not an important work but it does raise certain questions about how Nigerian, perhaps African literature is viewed and categorized in traditional academia. It is time to rethink the paradigm that drives the current world view.  Students of literature are still being taught from the same tired pedagogy, reducing our stories to the pre and post-colonial. Globalization as in the coming of the Internet and smartphones has already dwarfed the linearism of colonialism in terms of its impact on the way of life of Africans living and dying in Africa. To reduce today’s literature to something as remote and amorphous as the post-colonial is to literally miss the boat of what is going on in Africa today. Life is more complicated than that. Boundaries now bleed gleefully into each other and dissolve into that gaseous entity called the Internet. We must not be bound by the strictures of what was taught us in the classrooms. What I read in hard print lately seems to be relentlessly about documenting the lives of the other, Africans being the other. Case in point: Nigerian terms that are deemed alien to Western eyes are painstakingly italicized to separate them from “normal” English. Why should we be italicizing egusi in the year 2010? Do we do the same to a Reuben sandwich? Why must our otherness be branded with a big red sign – toxic waste? Stop italicizing our way of life:

The editor makes an eloquent case – that this is not the best of Nigerian writing. Not once is there mention of the works of Nigerians writers on the Internet. You will not find innovation here. The flagship short story Daughters of Eve by Peter Ike Amadi is a heartbreak of a story only in the sense that after reading this too-long tale that goes nowhere, the reader is filled with compassion for the amount of unnecessary effort that must have gone into creating this distraction, There are some other comforting names in the book: Tolu Ogunlesi, Ikeogu Oke, Jumoke Verissimo, and Uchechukwu Peter Umezurike. There is a reason why they shine; they know their craft because they practice it every day everywhere. I enjoyed Jumoke Verissimo’s Lightless Room. It was a reader’s delight. It did not belong in this collection of mostly tired tales. Emmanuel Iduma does show a lot of promise in his story Guitar Boy. However, even the best are plagued by editorial issues and poor research. Also, the claim that this is fresh writing is easily debunked by searching the titles of the stories on the Internet. I found quite a number of them on the Internet and even in other “anthologies.”

Dawson may have consulted some experts on the subject of Nigerian literature; however, it clearly does not show in the output. Several influential names come to mind: Bibi Bakare, Ike Anya, Muhtar Bakare, Sola Osofisan, Chuma Nwokolo, Nnorom Azuonye, Afam Akeh, Obiwu, Lola Shoneyin, Molara Wood, Jeremy Weate, Chika Unigwe, Victor Ehikhamenor, Ivor Hartmann, etc. Some of them are not even Nigerians; rather they are digital natives toiling on the Internet daily to push the envelope in terms of how our stories should be told. New Nigerian anthologies are born literally every day on the Internet featuring truly fresh and emerging voices. Fresh, frothing, scintillating prose struts out of those web pages and social networking media like great palmwine. You couldn’t tell from this anthology but Nigerian literature is alive and rocking although the reader can be forgiven for thinking it is on life support judging from the mostly wretched offerings in this anthology of mediocrity. If it is any consolation, the editor’s three sentence narrative on her Okada motorcycle experience in Nigeria provided one of the few nuggets of hilarity and brilliance in an otherwise forgettable anthology.

1 thought on “Daughters of Eve and Other Tedious Tales”