Colourful  Threads in the Nigerian Literary Fabric: A Review of Naija Stories by Unoma Azuah.

Naija Stories makes a rewarding read because a  sizable number of the stories in the anthology beam beyond the imperfections of the weaker stories. This collection adds a unique design to the tapestry that makes up the layout of the Nigerian literary fabric. The stories renew our plush tradition of yarning and knitting of anecdotes.  The anthology is divided into four sections with the subtitles: Tears, Kisses, Heroes, and Villains. These subtitles pretty much represent the contents of the sections.

Stories that beam with the brilliance of precision, include, “Blame it on a Yellow Dress,” “Showdown at Rowe Park,” and “One Sunday Morning in Atlanta,” among others.  These stories glitter with vigour. “Blame it on the Yellow Dress,” explores incest. It reveals how a father sexually abuses his young daughter. The writer makes the reader empathize with the main character, and effectively rouses our anger and succeeds at evoking our sense of pathos. “Showdown at Rowe Park,” chronicles the conflicts of secondary school students. It is quite a simple story, rich with humour with a well-developed suspense.  Though the language is near banal, the writer is able to capture the mood and setting in a way that effectively enhances the theme of the story.  He is further able to make such a familiar story, especially to Nigerians that can identify with life in secondary school, vivid and definitive.

“One Sunday Morning in Atlanta,” is another engaging story in the collection. Though some actions in the story are called to question when it comes to verisimilitude. For instance, the strong influence the protagonist’s mother has on him, seems rather  far-fetched  and the childish altercation  between the protagonist and his sister in the church makes one wonder if they are adults or teenagers.  Nevertheless,   the gradual build-up of the story makes it more convincing. The paradox in the fact that the protagonist, while in a club, dancing and socializing, could not get the attention of a girl he wants, but was able to get her into his house through the guise of evangelism adds a plus to the account because it makes the story emblematically charged.  Additionally, the writer’s ability to lay bare the contrasts of Nigerian idiosyncrasy and  American exclusive traits heightens his effectual use of wit. 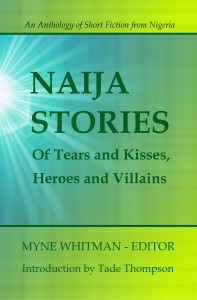 The very first story in the collection, however, sends discouraging signals to the reader. The premise of “A Glimpse in the Mirror,” falls flat because its theme of death is redundant and melodramatic.  Qualifying it within the context of a meal or a broth makes it taste like an over-salted soup. The central character, a coffin maker, loses all the father figures in his life and ends up losing his life as well.  The sardonicism in the fact that one of his customers wants a plane-coffin for his late mother who had always wanted to enter a plane, but never did, almost elevates the story.  But this boost fizzles out because that is all we see of this secondary character in the story.  There is no employment of variety in the story’s mode of delivery—no humour, no suspense and no re-channeled digression. Stories with the three E’s are always a pleasure to encounter: entertainment, education and expansion of one’s scope of life.  As Stephen Minot puts it, “When you turn from literary non-fiction to fiction you cut the tether with the truth.”

My hope for the three E’s dimmed as I read from the first section towards the last section. Some of the contributors to the anthology are amateur writers who have little or no idea of what a short story should be.  Hence, brevity among other flaws becomes a challenge. For instance, the story, “Can I Please Kill You,” is a mere didactic story about abortion. The story does not achieve much except attempt to sell a moral. The emphasis is on the fact that the protagonist decides not to go through with an abortion, while a nurse who is symbolic of ethical precursor praises the character for her wise decision. There is nothing crisp in the story’s structure, theme or style. Another story that does not succeed at its rendition is “Seeing off Kisses.” It drifts from one unfocused point to another. The inconsistency in characterization does not help.

Though some of the resolutions of the stories are loose, they nonetheless, bear conclusions  that fall within the standards of well tied ends. That is, some wind-up with optimistic outlook to life, while others culminate quite unconventionally, which in itself is positive because most unconventional or disturbing resolutions force us to re-examine some of the stubborn beliefs or expectations we hold.   Naija stories has done a successful work of showcasing new and emerging voices in Nigerian literature.

Unoma Nguemo Azuah teaches Composition and Creative Writing at Lane College, Jackson, Tennessee. She is an MFA graduate of Virginia Commonwealth University, Richmond, Virginia. She also has an MA in English from Cleveland State University, Cleveland, Ohio. Her undergraduate degree in English is from the University of Nigeria, Nsukka.  As an undergraduate at Nsukka, she edited the English department literary journal—The Muse and received the awards of the best Creative Writing student for two consecutives years: 1992 and 1993. Her other awards include the Hellman/Hammett award, the Urban Spectrum award, the Leonard Trawick award and the Association of Nigerian Authors/NDDC Flora Nwapa award for her debut novel Sky-high Flames.