#OccupyNigeria: For all the beautiful children murdered in January for standing up to the myrmidons of our darkness

I fully expect Nigeria’s Minister of Finance and Coordinating Minister for the Economy, Dr. Ngozi Okonjo-Iweala to be the next president of the World Bank. Her rejection as the first African to run the World Bank would be wrong on many levels. There is no one else better primed to execute the obnoxious policies of the World Bank against African and brown nations than Okonjo-Iweala. Her current tour of duty, although disastrous to Nigeria and her poor, has given her an impeccable resume to spread the World Bank’s gospel of uncritical capitalism and indifference to the world’s poor and dispossessed. Okonjo-Iweala has the playbook down pat, for those of us who still remember #OccupyNigeria, that uprising of Nigerian youths against the Okonjo-Iweala-led World-Bank endorsed policies against the poor, that uprising that was quashed with ruthless efficiency and that  left several young people dead for exercising their rights of association and protest.

No shrinking violet, Okonjo-Iweala has mounted an aggressive and fairly effective campaign for the presidency of the World Bank.  South Africa has endorsed her and The African Union has a beautifully penned hagiography in support of the candidacy here that should make even Okonjo-Iweala blush with excitement. There is a sense of entitlement here, but hey, regardless, she is going to be a vast improvement over the sad sack of odium that was the IMF’s Dominique Strauss Kahn. 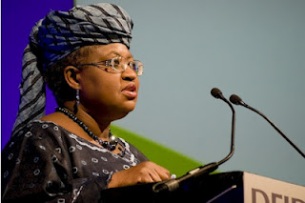 As an institution, the World Bank is an ancient bureaucratic relic whose time has come and gone. Now it is mostly a mean cudgel for meeting the West’s imperial needs in developing countries, aided by many of Africa’s intellectual and political elite. The fawning over Okonjo-Iweala by Westerners has been comic. Early in March, the Economist started out of the gate by braying Okonjo-Iweala’s term of endearment, Iron Lady.  Well, She definitely is no Margaret Thatcher, let’s not be patronizing. David Smith of the Observer leads the pack of hagiographies but unwittingly makes Okonjo-Iweala look like some sort of Don Quixote tilting at windmills, rather than a serious economist. You would think he just sighted a simian using twigs as an instrument to fish termites out of a log. There is more crowing here by Lant Pritchett of the Guardian. Annie Lowry of The New York Times has a more nuanced piece here on the three top candidates: Dr. Jim Young Kim, Ngozi Okonjo-Iweala and Jose Antonio Ocampo. The New York Times does have a more dignified editorial in which it appears to lean towards Okonjo-Iweala but it is loud in what it does not say about her candidacy.

What the West will not say in public is in the intelligence briefings that made President Barack Hussein Obama avoid her like the plague and go for Kim. Again, anyone in doubt should remember #OccupyNigeria. Okonjo-Iweala and her colleagues in Aso Rock, and NASS, that pretend-legislature, callously rammed through one of the most obnoxious taxes on the poor in the history of Black Africa. Again, many Nigerian youths died protesting this outrage on the majority by a privileged few screwing Nigeria for their own benefit. Under normal circumstances, were Okonjo-Iweala a Westerner or white, she and her bumbling team would have been fired for gross incompetence. The show of double standards is galling and maddening. Kim’s works have been given intense scrutiny and rigorous analysis while Okonjo-Iweala has been described in patronizing terms, with absolutely no mention of her views or documented works and her deadly role in the subsidy removal fiasco of this past January. But she is African and the world recoils when it comes to holding Africa’s political and intellectual elite accountable. That would mean, finally, Africa is on an upward trajectory, perish that thought.

It would be interesting to know what intelligence America’s White House had on all the candidates that made Obama choose Kim, someone whose views are actually full of compassion and common sense and seem to go against the grain of what the World Bank now stands for. In any case, Obama in my view has become an apostle of orthodoxy in thought and governance and it takes one to know and avoid one. Besides Obama has no history of respect for Africa and Africans. If he does he has a strange way of showing it; his tenure so far has lacked any coherent foreign policy when it comes to Africa. President Bush was a better friend of Africa, by far.

But I digress. When Okonjo-Iweala departs for the World Bank, she will be leaving Nigeria much worse than she found it. That is the most compelling reason why she deserves the World Bank presidency. Nigerians need a break. Okonjo-Iweala’s appointment would be the most eloquent marker of how seriously the world takes Africans as human beings. As a parent, I personally hold Okonjo-Iweala and the Nigerian leadership responsible for the numerous youths who were murdered and maimed early this year by the state for exercising their rights. Again, no Western leader could have survived that mess, not one. The world shrugs its shoulders routinely and rewards African incompetence, corruption and brutality. That is why certified wife-beaters, petty crooks and murderers are paraded on the world stage as “African statesmen.” This is how to keep Africa in perpetual bondage. The World Bank is good at that.

The presidency of the World Bank would be a wonderful homecoming for Okonjo-Iweala one of their own. It is interesting to me that the same African intellectuals and activists who constipated the Internet with anti-subsidy rants have been quiet. Indeed the few vocal ones are actively lobbying for her appointment. That is how we roll in Africa. I was one of several that protested the policies of the World Bank in January, how soon we forget. For the children that were murdered in the struggle for Nigeria, may their sacrifice not end up being for nothing. For my mother in the hellhole that serves as her village in Nigeria, the beating goes on. And the beat goes on. From the White House to the World Bank, Africa is screwed by her own. Farewell, I hope, and pray, Dr. Ngozi Okonjo-Iweala.

26 thoughts on “Why Dr. Ngozi Okonjo-Iweala should be the next president of the World Bank”