He wore one of his special embroidered dashiki tops that must have been high fashion when I was a girl. Now it spoke only of longevity.

There are many reasons why you should read Indigo, Molara Wood’s delightful and enchanting debut collection of short stories. First, Wood is a great story teller with a distinctly inimitable voice and it shows in this book. Second, Indigo is quite simply good writing, one that should be required reading in creative writing classes. As a writer, for Wood, the gift of beautiful writing is not enough, she models hard work. Wood is uncompromising when it comes to the written word; everything must be in place or the sentence won’t see the light of day.  Third, Wood ensures that in her stories, you will be entertained in the grand tradition of the oral storytellers of Africa, Wood proves masterfully that the short story lives and lives well. Nigeria is a land of storytellers; judging from this collection, Wood is a worthy ambassador of Nigeria. It helps that virtually all the stories in Indigo have been vetted externally and subjected to rigorous editorial reviews. Several are award-winning and previously published in reputable journals and books.

Seventeen stories make up Indigo. Using these engaging stories as robust, throaty vehicles of entertainment and enlightenment, Wood addresses a legion of topics expertly and in an orderly manner. The reader is not overwhelmed. These are not unctuous social commentaries pretending to be short stories. The stories are mostly narratives of triumph over adversity in the face of unconventional wars. Wood deftly avoids poverty porn and frees the reader to reflect, unsolicited, on the issues of contemporary Africa. What I really love about Indigo is this: Several stories are simply stories, like comfort food, you sit at Wood’s feet and just listen to a good story. This Wood does with her brainy, wry wit and signature tart prose; sentences are little daggers she throws at pressure points to get the desired reaction. The missiles, tightly wound, with Molara-esque attitude, fly off the pages and assault the senses in a gently seething riot of colors. As a luscious side benefit, I swooned over the stunning cover art, ‘Pensiveness by the legendary Muraina Oyelami embedded in Eazy Gbodiyan’s and Victor Ehikhamenor’s brilliant Indigo cloth themed cover designs. 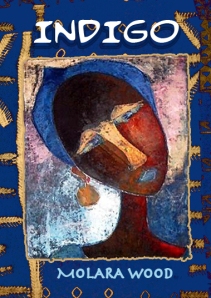 The book takes off, guns blazing, starting with Indigo, the title story, a touching tale about childlessness, societal expectations and culture clashes. And so the feast of words, carefully spun together begins. There is an abundance of impish lines to keep the reader engaged in this feisty book:

‘Shhh!’ Bola’s aunt, in whose arms the baby nestled, placed a finger to lips that seemed to occupy half her face. Her baggy boubou attire did nothing to hide the tyre-like circumference of her midriff. A mole perched on top of her left earlobe like an audacious fly. (Kindle Locations 56-59).

Throughout the book, Wood mostly appropriates the English language as her own. There are so many stories to fall in love with here. Read Gani’s Fall, a sly conversation about patriarchy and polygamy – and a delightful fable about an impish alliance among wives in a polygamous home, and laugh your ribs out. The language soars on the wings of a vivid imagination; a lovelorn woman complains of longing for the husband and you sigh as she moans about his absence from her bed, “he hardly ever darkened my doorway.”

Here are my favorite lines:

The widow next door to him in the village does his laundry for him. Some whisper that she does more. (Kindle Locations 375-376).

The family cat, ever sluggish, rediscovered speed and tore away. (Kindle Locations 320-321).

You must read Night Market. In this gorgeous story, all of Nigeria’s dysfunctions spill out into the streets with an African American spouse as a deeply disturbed witness to the mayhem – and, oh yes, there’s a little bit of magic realism thrown in:

Kelemo’s Woman reminds the reader of Chinua Achebe’s Anthills of the Savannah. It is a play on gender relations slyly presented as a short story around a military coup. Some of the dialogue seem eerily prophetic given Nigeria’s current challenges:

This country is being run to the ground, and soldiers will only speed up the burial. You, me, and others like us, are going to have to fight – and sacrifice – to turn around the course of this nation! (Kindle Locations 992-993). 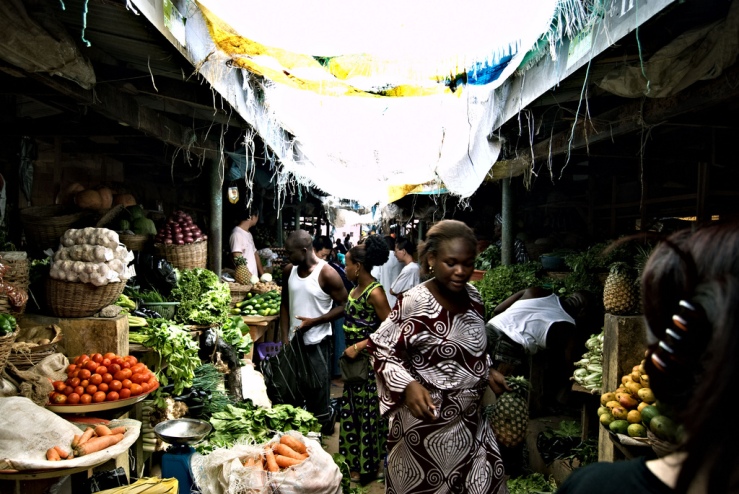 In A Small Miracle, Wood displays her gift for good dialogue and for arranging words on the palette like the diviner’s cowries. Beautiful Game is quite simply a beautiful story. England and soccer come alive in the hands of immigrants. In In Name Only, a story about a sham marriage to legalize residency in England is expertly used to showcase life as an immigrant in moody Babylon. In Leaving Oxford Street and The Last Bus Stop, the Nouveaux rich, social climbers and dreamers wallow in fashion statements, dreams of wealth, and the forced mediocrity of relocation. I was moved by In the Time of Job, a pretty story about immigration and an unlikely friendship among two people from opposite sides of the ocean.

The Scarcity of Common Goods is probably my most favorite story. I love how Wood weaves class issues, infidelity and societal expectations into a most unusual tale. But then Smoking Bamboo has to be the best love story I have read in a long time. Here, Wood’s imagination soars gently and rests firmly on the reader’s own imagination. It is a truly authentic and wondrous story swimming mostly in awesome prose-poetry. Still Wood manages to talk to us about the ravages of war and drug and alcohol addiction on communities.  It is also about migration – the endless restless quest for peace, prosperity and happiness. The character Amugbo reminds the reader of Unoka in Chinua Achebe’s Things Fall Apart. You don’t want this story to end, this pretty but sad tale of a wind-swept, war-ravaged land filled with women and children only. And one drugged man. Smoking Bamboo alone is worth the price of the book. Hear Wood:

When Angelina stepped in her delicate manner on the moist earth her toenails crimson, I thought babies would fall from the sky. And I saw the fierceness with which Amugbo’s bloodshot eyes lit upon her. I had seen it coming days before when in my mind’s eye I saw a great bird whose wings swept the air up and down, beating sprays out of clouds that hung heavy in the late morning sky. The wings went still over our ravine , cosseted by an endless canopy of trees. Avian eyes observed water vapours rising in airy steams from the gorge to be sucked into ravenous clouds. (Kindle Locations 2127-2131).

There is one sense in which Indigo is an important book; Its treatment of gender relations, patriarchy, and polygamy.  I found myself thinking of similar themes in the books and essays of writers like Lola Shoneyin, Chimamanda Ngozi Adichie, Chika Unigwe, Taiye Selasie, NoViolet Bulawayo, etc. It would make for an interesting and valuable scholarship to study the works of all these thinkers in in relation to patriarchy, gender tensions and related anxieties. I previously shared my views on Adichie’s approach (here). I would say, compared to Adichie, Wood’s approach is more subtle, more sophisticated and definitely more respectful. Unlike Adichie’s Americanah, Indigo deploys less of caricatures to describe patriarchy and make her points about gender issues.

The book is not without its flaws (yes, I know, no book is perfect): Sometimes the purpose of the English language is to remind us of how much we have lost in the translation of our lives into that of the other. Wood is mostly successful in appropriating the English language as if it is Nigerian but some translations of indigenous proverbs are awkwardly done, like: “The child does not recognise the enchanted herb; and so calls it a vegetable.” The reader yearns for a crisper version. Or blessed silence. Stories like Fear Hill and Trial by Water read like promising works in progress. Written in Stone is perhaps, the most ambitious – and the most flawed.  It is a bold attempt at historical fiction that is compromised by a certain looseness with historical facts and a disconnectedness that makes it read like two halves of two unrelated stories. It has the protagonist coming upon written communication in the caves of walls in 1879. In English. Historians would no doubt find that improbable in Nigeria, if not inaccurate. I would have loved a collaboration between Wood and a gifted illustrator like Victor Ehikhamenor to make the stories more alive and give them an additional dimension, it is just as well, the stories engaged me nonetheless.

The 21st century is reshaping the role of the book with spectacular muscle. Devotees of Wood will instantly recognize most of these stories; over the years she has been prolific on the Internet and social media, giving of her gifts pretty much freely. I easily found half of the stories on the Internet. I see profound opportunities on the Internet for thinkers like Wood whose gifts are hobbled by the lack of a robust publishing industry in Black Africa. However, worldwide, relying solely on the book to access the reading audience is becoming a problem. The book is fast becoming primarily an archive of sorts.

As a near-aside, Wood has a legion of followers in the literary world but many readers will not recognize her.  Well, she is arguably one of the most influential of what would probably be referred to as the fourth generation of writers – an enigmatic and elusive group of writers in their late thirties to early fifties range who have quietly redefined contemporary African literature as we know it today by moving it with brawn and brain into the digital world. Much is known about the older generation and the very young generation, but very little is known of this quiet but powerful group, on whose laps it fell to, in effect, digitize African literature. There are too many names to mention, but they are finally stepping out of the shadows and writing books. It’s a good thing.

Wood’s passion for African literature is legendary; courageous and visionary, in the early 2000s, she dropped everything in London and moved back to Nigeria to help found NEXT newspapers, one of the most exciting acts of journalism to ever come out of Africa. At NEXT, she nurtured many of us as our editor and kept us in line with her keen eye, passion for the word, and a punishing work ethic. When the NEXT experiment folded, she remained in Nigeria where she continues to be a mover and a shaker in literary circles.  For thinkers like Wood and her generation of writers, the book as a medium of communication is a wretched vehicle for their gifts, the Internet is their book, literally. You would have to go to the Internet to get a sense of Wood’s contribution to the literary arts. There, she and many literary leaders daily supervise the new literary genre that features the real-time collision and collusion of reader and writer. One day, it will be possible to make money of this emerging genre. And it would be because of the visionary work of Wood’s generation. Google her. But first you must read Indigo. Oh, and I learnt a new word. Rill. Google it. After you are through googling Molara Wood.