‘I am going to Nigeria!’ I said when the Africa39 list was announced.

Online newspapers in Malawi did not know what to make of the news. ‘Malawian writers Stanley Onjezani Kenani and Shadreck Chikoti have been named  among 39 under 40,’ one paper wrote. In the comments section, an anonymous reader rightly asked: ‘What does that mean?’

Another paper probably understood too much about what the news meant, because it wrote: ‘Kenani and Chikoti have been selected among 39 best African writers under the age of 40.’ They put a photo of a smiling me at the centre of the article. I weigh slightly over a hundred kilos, and my stomach looks like I am seven months pregnant.

First comment: ‘Is the man in the photo really under 40? Please, let us not be like African footballers, always understating their age.’ Farther down the comments section, a former classmate in college jumped to my defence. ‘I was in the same class with him,’ he wrote. ‘He was tiny before he started working for a hotel.’ But the news had by that time ceased to be about what the Africa39 list meant.

I wrote the editor of the online outfit to clarify that we were not 39 ‘best African writers under the age of 40.’ There were finer writers out there who were not on the list. I mentioned NoViolet Bulawayo as an obvious example. We were, instead, ‘39 of the most promising African writers under the age of 40’. Ignoring my point, he wrote back: ‘How much money have they given you for making the list?’

But the way the news was received showed that Africa39 meant different things to different people. To me, it meant going to Nigeria to eat jollof rice. My work as an accountant gives me few opportunities to interact with like-minded individuals. In Geneva, Switzerland, where I live, there is hardly any friend I could meet and discuss writing with.

So I looked forward to interacting with all those wonderful people, colleagues I had known for a while like Rotimi Babatunde and Abubakar Adam Ibrahim, and lots of others I would be meeting for the first time, among them the brilliant Kenyan poet Clifton Gachagua, whose poetry collection, Mad man at Kilifi, I was reading alongside Kei Miller’s awesome The Cartographer Tries to Map a Way to Zion.

I was curious about the format the Port Harcourt gathering was going to take. I hoped it would be like Macedonia’s Struga Poetry Evenings where, after reading our poems back in 2007, we poets would gather at the balcony of the Hotel Drim to drink free wine or beer or coffee while talking about Ezra Pound or any of the greats. Or Poetry Africa in Durban where I had the chance to sit down for dinner with Dennis Brutus two years before his death. In short, I hoped for a collegial atmosphere that would make it possible for me to build new friendships.

Port Harcourt, however, turned out to be a disappointment in some way – and I am speaking for myself. The only time the writers got to meet as one group was when they sat on the bus to go to the University of Port Harcourt, or to the Ken Saro-Wiwa Centre, or to the Alliance française. 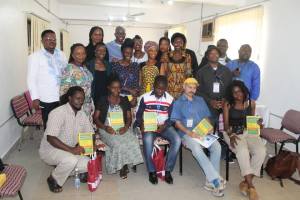 There was an attempt at organizing a cocktail on the festival’s opening day. The only drink featured was fruit juice. It was a colossal failure.

But not all was lost. Those who knew each other before Port Harcourt gathered in smaller groups in the evenings to chat. They sat next to the swimming pool at the foot of the ten-storey Presidential Hotel where those who could afford ordered drinks from the hotel’s expensive poolside bar.

I got to know Eghosa Imasuen this way. Desperate to shake off boredom one evening, I wandered to join a group of people I was not familiar with. And there was Eghosa. And Lola Shoneyin. And Ken Saro-Wiwa Jr. And Chibundu Onuzo. And a few other wonderful people.

Eghosa is the type of person that makes you feel as though the two of you have already met before. He started off with imitating my voice in a way that made everyone laugh. He had heard me earlier speaking on behalf of the other writers at the opening ceremony, and it was the delivery of that speech he imitated with admirable exaggeration. Great guy, Eghosa. I looked for a copy of his book, Fine Boys, but by the time I got it, he had already left the festival, depriving me of the chance for his autograph.

Ad hoc gatherings like these are what rescued the book festival from becoming too boring for me.  Organizers, friendly and helpful whenever you accosted them for help, gave me the overall impression of being overwhelmed by the enormity of the moment. 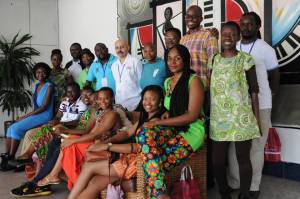 Days were long and empty, especially since there was only one event per day. Some of those once-a-day outings were not as satisfactory as I would have wanted them to be, because it mostly meant mentioning your name, which the audience were probably hearing for the first time, and in all likelihood forgot it as soon as you finished introducing yourself. You could also probably say a sentence or two about your work, and that was all. We were, after all, 22 of us, and moderating such a crowd was far from easy. Perhaps if it were any person other than the brilliant Ellah Allfrey as moderator, the events could have been without life.

I tried to enjoy the Nigeria I had come to see. I tasted the food and ventured into the streets. I saw excellent buildings of a city on the rise. I saw churches of various names and sizes. Cars seemed to be in a perpetual ‘go-slow’ or ‘hold-up,’ terms meant to classify various types of traffic jam. If Port Harcourt is like this, I wondered, what about Lagos?

On our way to the University of Port Harcourt, I saw a giant billboard touting the Rivers State development agenda. At the foot of that billboard a man was passing urine, and for a moment I wondered whether that was a kind of protest, that he was deliberately pissing on his state’s development agenda.

At the Ken Saro-Wiwa Centre, a poster on a building across the street said, ‘We must try our best to make the next governor of Rivers State an Ijaw man or woman.’

Horrified by such blatant tribalism, I said to the man standing next to me, ‘In Malawi, where I come from, that would be illegal.’ The man, probably Nigerian, said that maybe Nigerians were right to drop the pretences. ‘In Kenya, for instance,’ he said, ‘I hear such a poster would also be illegal. But, believe it or not, privately Kikuyus would in general say they want the next president to be a Kikuyu; and Luos would say they want a Luo.’

I ventured back into the Ken Saro-Wiwa Centre. I found that writers had quickly organized themselves for an impromptu show. Ricaredo Boturu from Equatorial Guinea read us a beautiful poem in Spanish; Chibundu Onuzo sang, Nana Brew-Hammond and others read from the Africa39 anthology or recited poems of their own. Glaydah Namukasa presented an interesting piece in Luganda.

But aside from such flashes of interesting outings, the entire event, on my part, passed with me lying on bed and yawning, waiting for departure.

Finally, we left. At the airport, the security guard nearly blocked me from proceeding to the departure gate. Apparently, he did not understand French and German – the only languages written on my Swiss residency permit.

About five people inside the airport asked me for money: the police who searched my bag, immigration officials who stamped my passport and security guards who screened my hand luggage. But it was the sixth person who impressed me, because he asked for a book. I gave him José Saramago’s The year of the death of Ricardo Reis.

We were three hours early for the flight, but an interesting chat with Tope Folarin made those hours fly by unnoticed. Tope’s work ethic left me so inspired that I boarded the plane looking forward to a lot of writing back home.

As my plane shot into the dark skies of the Port Harcourt night, I told myself that it had certainly been worth my while to come, to see the Nigeria I had always wanted to visit. I wished, however, that the event had been shorter and more compact.

Stanley Onjezani Kenani is a writer from Malawi. Shortlisted for the Caine Prize in 2008 and 2012, he was named as one of the Africa39. His short story, The Old Man and the Pub, is part of the Africa39 anthology edited by Ellah Allfrey and published by Bloomsbury in October 2014. An accountant, he currently lives and works in Switzerland.